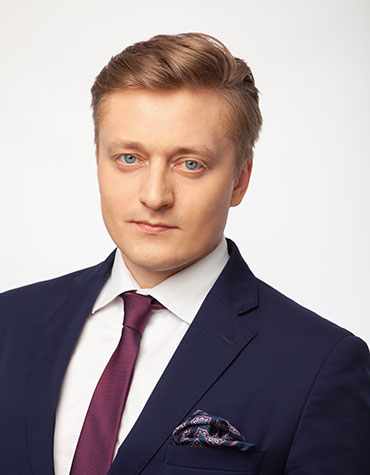 Managing Partner, Lawyer, Ph.D. Warsaw University Graduate, the Faculty of Law and Administration, which he graduated with honors in 2012. In 2013–2014 he graduated the National School of the Public Prosecutor’s Office during which he practiced in the prosecutor’s office and the courts of Warsaw, getting to know the specifics of working in law enforcement and justice.

In 2014–2016 he underwent the legal training in the District Council of Lawyers in Warsaw. In 2017 he passed the law exam (in the Chamber of Lawyers in Warsaw). Doctor of Law and Doctoral Graduate at the Institute of State and Law at the Faculty of Law and Management of the University of Warsaw, where he conducts scientific and didactic activities in the field of jurisprudence, political and legal sciences and the theory of law.

The author of the articles in the field of the substantive and procedural criminal law, the history of law as well as the theory and philosophy of law, published in the prestigious national Polish editions (including “State and Law” or “Seym Review”) and in the international scientific magazines. In his scientific work he pays attention to the legal aspects of the position of forensic experts in the procedural practice, that is reflected in the book entitled “The position and the role of a forensic expert in the legal system of Poland” (Warsaw, 2016).

Since 2013 he has been involved in the activities of non-governmental organizations, concentrating on freedom of economic activity, freedom of speech and the protection of the constitutional order.